Epiphany Holiday and tradition in Italy: who is la Befana? | ELLCI

Posted at 14:08h in Arts & culture by Michela Gatti

You thought it was over after Cenone, the New’s Year Eve fabled dinner, but actually in Italy the official end of the Christmas season isn’t until January 6—the Day of the Epiphany holiday in Italy.

Epiphany is the twelfth day of Christmas and it commemorates when the three Wise Men arrived at the manger bearing gifts for Baby Jesus (read more about Italian Christmas traditions).

About gifts: ask Italians when they open gifts, and they will tell you where they are from! Gifts are most commonly exchanged on Christmas Day near the Christmas tree sometimes with the belief that Jesus has delivered them or Santa. But children of some smaller, northern Italian cities, like Bergamo, Mantova and Bologna believe that blind Saint Lucia brings gifts for children on December 13, so they open them earlier.

Other families may wait until January 6. Epiphany holiday in Italy is a big deal for many children. On the night of The Epiphany’s eve, children prepare their calza della Befana– corresponding to the Christmas stocking- near the chimney so that it can be filled with candies and presents. So after Saint Lucia, Santa Claus, and Baby Jesus finally comes la Befana!

Who is la Befana? History and folklore

La Befana is a unique Italian epiphany tradition. She is a kind of generous “good witch” who – flying on her broomstick –  distributes sweets and small toys to good children and coal (black sugar) to the naughty ones. She’s always pictured as an old woman with poor clothes but a generous heart, and with an inevitable broom.

Celebrations are most felt especially in the central regions of the boot, where the figure of this generous granny is a real institution. Her origin is custom in both the pagan and Christian traditions.

The tradition goes back to Ancient Rome when it was custom to celebrate the winter solstice exchanging gifts. According to what has been handed down from the oral narrative, the tradition derives from Numa Pompilio, one of the seven kings of Rome. Pompilius apparently used to hang a large sock inside a cave, between the winter solstice and the first days of January. According to a popular legend, in fact, from time to time a nymph could have filled the improvised pouch with prestigious gifts from nature. The choice of the sock, as easy to guess, derives from its shape: in addition to an indispensable garment, it can, in fact, become a large container.

The Christian tradition instead connects this pagan tradition with the history of the Wise man. They asked her for direction and they announced Christ’s birth, but since she was too busy with housework she declined to join them. Later she changed her mind, and to this day is still searching for the child, leaving presents for any good children she comes across.

Unfortunately, the old woman was very poor, so much so that she was dressed in patched clothes and sandals that were now destroyed, so the locals decided to hang socks and boots to repay her for her effort. Arriving inside the house, the woman could have chosen whether to collect socks shoes or, alternatively, fill them with irresistible sweets.

La Befana is a particular tradition in Rome and Bologna, where the main piazzas often host fun activities for children; in Venice, along the Grand Canal, on January 6, the Befana Regatta takes place. In many parts of Italy a large wooden pyre – with the puppet of Vecia (old woman) on top –  lights up. Looking at the direction of the smoke and the sparks, predictions are made for the future.

In Tuscany there was the custom of the “Befani”, engaged in trial, usually chosen by fate: in a focaccia a hidden bean was hidden, a symbol of fertility, and whoever found it became King or Queen of the Fava and chose the companion Comrade throwing the bean into their glass. 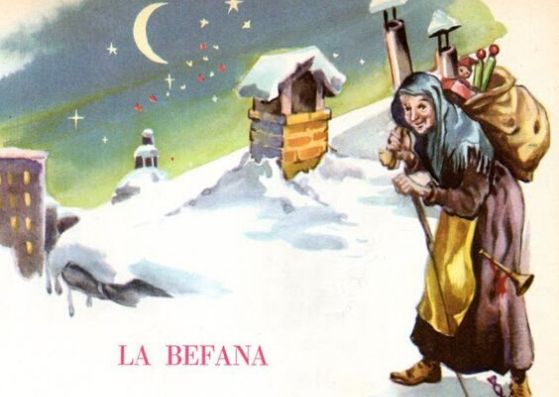 The oral tradition is full of rhymes and poems on the myth of the Epiphany, which are known in slightly different versions throughout Italy. Here is one of the versions:

The English translation is:

The Befana comes by night
With her shoes all tattered and torn
She comes dressed in the Roman way
Long live the Befana!

Another version is given in a poem by Giovanni Pascoli:

The English translation is:

Sign Up to our newsletter and never miss out on the latest events!