25 April: how is Liberation Day celebrated in italy | ELLCI

How is Liberation Day celebrated in italy?

Home > Arts & culture  > How is Liberation Day celebrated in italy?

How is Liberation Day celebrated in italy?

Posted at 09:47h in Arts & culture by Michela Gatti

Why April 25 is celebrated in Italy: history and meaning of the day on which the liberation from Nazi fascism and resistance is remembered and celebrated.

April 25 in Italy is a national bank holiday. The feast of April 25 in Italy commemorates the liberation from fascism and the Nazi occupation of the country. It was established in 1946 by the provisional government of Alcide De Gasperi.

Liberation Day is also known as the anniversary of the Resistance, in which tribute is paid to the partisans of all political backgrounds who oppose the Nazi occupation. 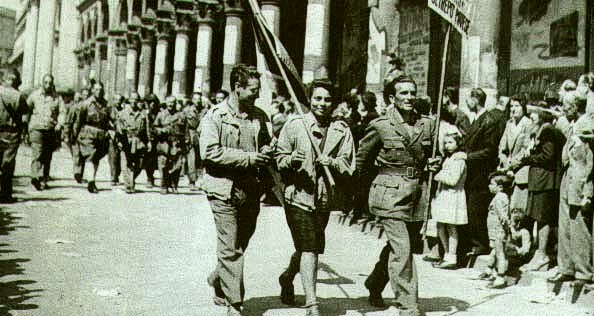 The history behind the 25th of April

Italy after the armistice of 8 September

In Italy, the partisan formations formed following the armistice of 8 September. It was a crucial date because it proclaimed the unconditional surrender of Italy to the Allies and sanctioned the end of the alliance with Nazi Germany of Adolf Hitler.

The country, already exhausted by years of war, remained without an official guide. The king, the head of the government Badoglio, and the High command top brass are transferred to Brindisi, leaving the capital without a defence plan.

Rome became an open city,  (Rossellini started shooting the film Rome, Open City just two months after the liberation of the city) since it surrendered to enemy forces without fighting.

The King’s announcement to the nation had been deliberately ambiguous in the hope that the Anglo-Americans would lead the offensive to the Germans in the country’s hubs.

That didn’t happen and the misleading announcement left the Italian army without a strategy and with contradictory orders. German forces, on the other hand, didn’t waste time and on the night of September 8, they took possession of airports, railway stations and barracks, catching Italian forces by surprise.

The partisan formations were established on the initiative of both anti-fascists from different political movements and soldiers from the dissolved royal army.

On September 9, 1943, the National Liberation Committee was founded in Rome which brought together the various parties of historical anti-fascism into a single body. The Italian state was practically dissolved and with it the credibility of its institutional leaders. The partisans then gave way to the war of liberation:

The partisan formations, initially composed of a few thousand men, later saw the participation of a large part of the population. Peasants, workers and women (some estimates women were 70,000) brought the partisan army about 300,000 people.

Initially, the fighting formations were called “bande”/gangs and only later they called “brigades” and “divisions”.

The Italian resistance was made up of many different groups, including a wide range of political parties (the Italian Communist Party, the Italian Socialist Party, the Christian Democrats, the Labor Democratic Party and the Italian Liberal Party), who together formed the National Liberation Committee ( CLN).

Although badly equipped, they started fighting against fascist collaborationism and the Nazi occupation. It is for this double aspect that the armed struggle was at the same time civil war and a war of liberation.

The German and Fascist occupation in Italy did not end in a single day but April 25 is a particularly important date. 25 April 1945  coincided with the withdrawal of the soldiers of Nazi Germany and those of the fascist Republic of Salò from the cities of Turin and Milan.

In Milan, a national general strike had been proclaimed against the German occupation and against the fascist war.

After April 25, all fascist leaders were sentenced to death and Benito Mussolini was killed three days later after attempting to escape from northern Switzerland. Their bodies, hung by the feet, were exhibited in Piazzale Loreto in Milan.

The Americans arrived in the city on May 1st and German forces eventually officially surrendered on May 2nd.

The liberation was a fundamental turning point in the history of Italy as it led to the first free elections since 1924. On June 2, 1946, it was voted for the first time with universal suffrage and women were also able to vote. All Italians over the age of 21 were called to vote to choose between the Monarchy and the Republic and to elect the deputies of the Constituent Assembly.

April 25 was designated a national holiday in 1949 by Alcide De Gasperi, the last Prime Minister of the Kingdom of Italy.

How do Italians celebrate the day?

There are numerous official ceremonies across the country, including visits to the mausoleums of partisan soldiers. Politicians give speeches every year to emphasize the importance of remembering the resistance movement and creating great involvement around the principles of our Constitution.

Most Italian cities organize political demonstrations and rallies in Rome and Milan.

You will hear the song “Bella Ciao” in most of these events. It has become known as the anthem of the Italian resistance movement and today it is the symbol of resistance against all abuse and a hymn to freedom and tolerance, not only for Italians. Over the years Bella ciao has, in fact, reached a planetary diffusion as a popular hymn for social struggles.

This year the Liberation Day will take place at home, away from the usual squares, but social initiatives have multiplied to celebrate it from home and keep the principles of the Italian Constitution alive.

Do you want to know more about Italian history and culture? Sign up for an advanced Italian language course.