How does Italy celebrate Easter? Discover every tradition | ELLCI

Easter: How does Italy celebrate this festivity?

Home > Arts & culture  > Easter: How does Italy celebrate this festivity?

Easter: How does Italy celebrate this festivity?

Posted at 12:30h in Arts & culture by Michela Gatti

Easter is one of the most important holidays of the year in Italy, it marks the beginning of warm-season and outdoor activities. Popular festivals, village festivals, concerts, religious rites and processions are just some of the events organized during this period.

This year Easter falls high. The Easter date is variable since it coincides with the Sunday following the spring full moon. According to this rule, it is said that Easter is low if it falls from 22 March to 2 April, average from 3 to 13 April, high from 14 to 25 April.

How does Italy celebrate Easter? From north to south, especially the Good Friday Passion has inspired numerous and heartfelt rituals that include processions, re-enactments and staging.

Find out how Italy celebrates Easter

The celebrations of Easter begin the previous Sunday, to remember the triumphant entry of Jesus into Jerusalem, which was welcomed by the waving of palm leaves. On this day it is not uncommon to see families and children returning home with olive branches blessed in the church (in the absence of palm trees).

Thus begins the Holy Week during which various rites are held. Thursday remembers the recurrence of the Last Supper and of the “Eucharistic celebration”.

Good Friday is the day of Via Crucis: the streets light up with torches and are crossed by processions that retrace the process, the ordeal and the death of Jesus.

On Saturday at midnight, the bells announce the Resurrection. Sunday is the most important day, Lent, the long period of fasting, is over: colorful eggs, dove-shaped cakes and chocolate eggs are distributed. The egg, symbol of life that renews itself and hopes for fruitfulness, is connected to the meaning of Easter as the feast of spring and the awakening of nature.

In Italy, the so-called Monday of the Angel -Easter Monday – Little Easter or Pasquetta – is the last day of celebration. It remembers the meeting of the winged messenger with the women who came to the empty tomb. It became a public holiday in the national calendar only after World War II, to prolong the spring break. Since then the use of out-of-town and open-air excursions has spread.

This year thanks to the high Easter, spring holidays are very close. Easter celebration can thus become a long vacation if they are linked to April 25th long weekend and May 1st.

Those who stay or visit Italy are spoiled for choice among the many traditions and costumes that can be admired in every city and village.

But what makes Easter so distinctive in every city of Italy? 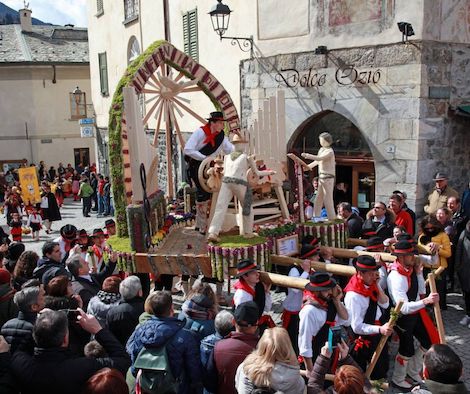 In Bormio, we find the tradition of the Pasquali: the parade of allegorical floats adorned with flowers and moss brought by young people in traditional costume.

In the center-north, we find instead Easter celebrations whose protagonist is the egg: the Sagra and the Palio dell’uovo in Tredozio with games, battles and parades of allegorical floats.

The dove is the protagonist of the famous celebration of the Scoppio del Carro in Florence, which dates back to the time of the first crusade. On Easter Sunday a mechanical dove hits a cart in front of the Duomo of Florence, thus lighting the fireworks contained in the cart. 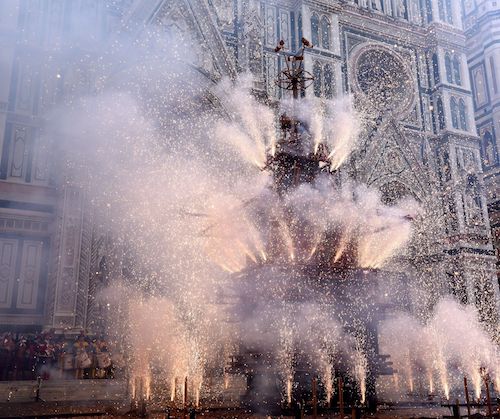 Sicily is rich in ancient local rituals and customs where masked characters parade through the streets of the cities. Among the most suggestive we find the Real maestranza in Caltanissetta which dates back to the Spanish domination, the procession of the Mysteries in Trapani and the celebrations in Prizzi and Adrano, an eighteenth-century tradition handed down from father to son. 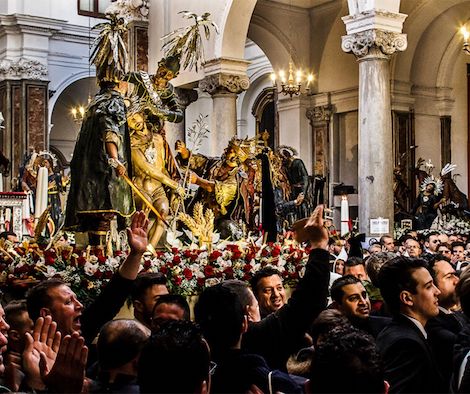 Finally, not to be missed in Rome, the evocative Via Crucis of the Pope that reaches the Colosseum. 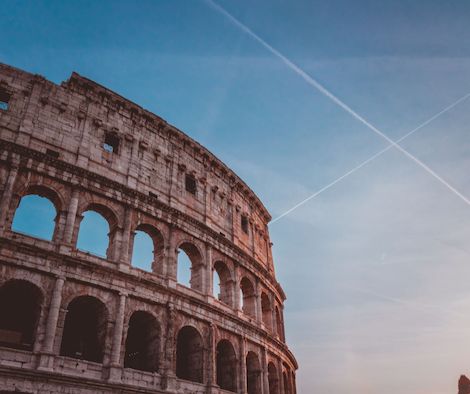